At SureStore, we’re no stranger to boxes. Countless customers pass through our doors each week to drop off, store and retrieve piles of boxes and belongings from our self-storage units. Simple enough, nothing untoward.

But when it comes to the silver screen, a simple box can become an ominous and intimidating object. Whether the box has some kind of creepy contents or the function of the box itself is hiding something scary, there are many films in which a simple box has evoked plenty of tension and terror from audiences!

So, grab the nearest cushion to hide behind as we reveal our list of the 5 creepy movie boxes that should have stayed shut!

First on our list is perhaps the least scary of the five, but don’t let your guard down just yet! In this fantasy adventure comedy, struggling artist Dave decides to construct a fort in his living room made entirely from cardboard boxes, only to end up trapped by the many pitfalls, traps and creatures scattered throughout his own creation!

After his friends form a search party and enter the maze to rescue Dave, many characters meet a grizzly end by triggering booby traps, or at the hands of the mighty minotaur (oh yeah, there’s totally a minotaur). While this is more comedy than horror, there’s more than enough kills and cardboard in this movie for it to make the list!

This psychological thriller is positively overflowing with suspense and grows increasingly uncomfortable as the film draws towards its conclusion. In the film, a married couple encounter ‘Gordo’, an acquaintance from the husband’s past who begins to act increasingly overbearing and strange towards them.

After more details about the husband’s past relationship with Gordo are revealed, the couple is finally presented with the titular ‘gift’, a neatly-wrapped gift box topped with a bright red bow. The contents, on the other hand, are far from pretty, and perfectly delivers a stomach-churning cliff-hanger that sure to set you on edge!

Anyone who’s seen even one movie from the ‘Saw’ series will know how the film’s villain ‘Jigsaw’ plants sadistic traps and devices on his victims, creating a ‘game’ for each of them to play, offering a chance to escape his captivity. While there were a few ‘box traps’ to choose from throughout the series 8-movie run, we think the tension and conclusion of the ‘water box’ trap from Saw 5 was just pure nightmare fuel!

In this scene, FBI Agent Strahm wakes to find his head has been firmly sealed in a thick transparent box, which begins to fill with water, giving him only seconds to think of a solution. With a little quick thinking and nerves of steel, Agent Strahm finds a pen in his pocket and uses it to perform an impressive (yet incredibly unsanitary) tracheotomy. Gruesome, but undeniably awesome!

This neo-noir crime thriller contains perhaps one of the most revered and shocking twists in modern movie history, and was a close contender for our #1 spot! As two detectives investigate a series of connected murders by serial killer “John Doe”, they discover each of his victims represent one of the seven deadly sins.

As the film draws towards its conclusion, John has one last trick up his sleeve. The detectives and John head to the desert and a terrified delivery driver under John’s control meets them there, handing over an ominous cardboard box to the detectives. Now, we’d hate to spoil one of the most iconic movie twists of all time for you, so for readers who love dark thrillers and haven’t seen Se7en, this is a MUST see. Needless to say, the contents of the box bring about a jaw-dropping conclusion that is still discussed by movie lovers to this day! 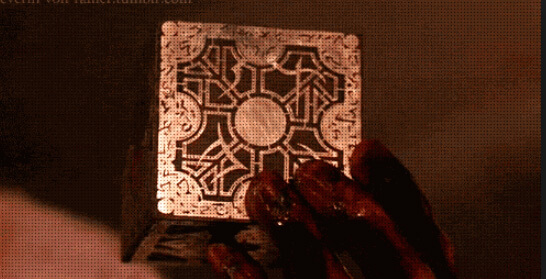 Hellraiser is a classic 80’s horror movie and spawned many sequels throughout the following decades.

After the main character Kirsty solves an ancient puzzle box, a terrifying league of other-worldly monsters known as “Cenobites” are released, who unleash a gruesome punishment on countless victims throughout each movie in the franchise.

The leader of the Cenobites, “Pinhead” has become one of the most iconic antagonists of the horror movie genre, and the sheer level of gore and horror in this Hellraiser series is more than enough to win Hellraiser and the puzzle box the #1 spot on this list!

Think there’s a creepy box that should have made our list? Let us know on Twitter @SureStoreLtd, if we get enough, we’ll put a ‘Top 5 Fan Suggestions’ post out in time for Halloween. Sleep tight!